YOU MAY QUOTE FROM, COPY, RESEND THIS DOCUMENT AS LONG AS YOU  CREDIT THE WORK AS: Time-Flow Photography Manifesto

You can download a copy of this Manifesto as a PDF file at this URL:
https://www.academia.edu/25824599/Time-Flow_Photography_Manifesto

PLEASE NOTE: This is the first draft -- we will accept comments, suggestions, additions, support or criticisms for the next couple of weeks and then will issue the final Manifesto in due time. If you would like to also be one of the sponsors, let us know. This initial draft was written by Rick Doble, but he expects that when completed it will be a work in which many have contributed.

We draft the following Manifesto because we are annoyed by critics who make unsubstantiated claims that Time-Flow Photography is purely accidental although it does, in fact, require more skill than traditional photography. And further we offer this Manifesto because we are also angered by pronouncements that Time-Flow Photography is not a legitimate form of photography.


TIME-FLOW PHOTOGRAPHY DEFINITION: We define 'Time-Flow Photography' as one that deals primarily with slow shutter speeds and movement that is visibly recorded in a photographic image. The movement can be camera movement, subject movement or a combination of the two.


PHOTOGRAPHY IS THE ART OF LIGHT ON LIGHT SENSITIVE MATERIAL 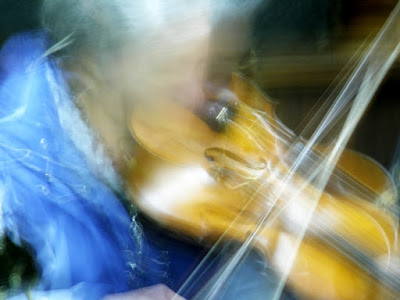 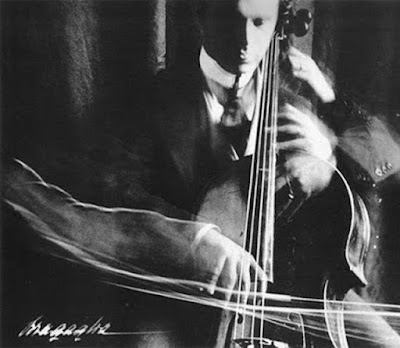 Anton Bragaglia (his photo above) wrote his own Manifesto in 1911, Futurist Photodynamism (Fotodinamismo futurista) in which he described many of the same ideas that are fundamental to Time-Flow Photography but were difficult to implement with the film and cameras of the time. He wanted to understand unbroken movement with precision -- and he wanted to put together what he called an "algebra of movement."

"Light to me is perhaps the most profound truth in the universe. My thinking has been deeply affected by the belief everything is some form of radiant energy."

"Light used in its own right...gives to photography the wonderful plasticity that paint gives to painting without loss of the unmatched reality of straight photography."


Experimental digital photography has the potential to create abstract expressionist pictures with the depth and quality of traditional painters but with light as the medium -- light which has characteristics all its own.
Rick Doble, 2010 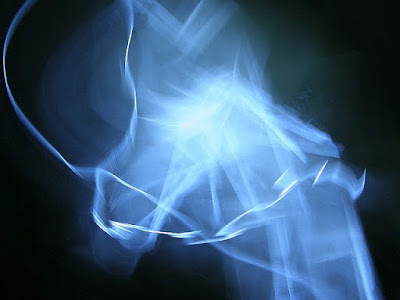 CAMERA MOVEMENT
This photograph was created entirely with camera movement and a still shaft of light:
4 second exposure, handheld and white balance set to give the light a blue color.
By Rick Doble.
Exhibited in the Bridges Mathematical Art Galleries at the Bridges Conference in 2012.
http://gallery.bridgesmathart.org/exhibitions/2012-bridges-conference/rickdoble

PHOTOGRAPHY HAS BEEN CHANGING
AND EVOLVING FOR ALMOST 200 YEARS SUBJECT & CAMERA MOVEMENT COMBINED
The camera is moving relative to the background outside the moving car,
but the camera is steady in relation to Doble's wife who is driving
and whose movements are subject movements.
Photograph of Doble's wife driving: 8 seconds, handheld, available light.
By Rick Doble

Exhibited at the SCIENAR (Science/Art) Exhibit in Bucharest, Romania, 2010.
https://www.academia.edu/24480664/Rick_Dobles_Space-Time_Photographs_and_Writings_with_the_European_SCIENAR_Science_Art_Project

Claims That Time-Flow Photography Is Accidental:
One customer review said Doble's book Experimental Digital Photography was a "book about pictures you could easily take by accident." A new art form requires that people look at the works in a new way -- otherwise the artwork can appear random. When the Abstract Expressionists first exhibited their paintings in the 1950s, many said things such as "My kid could do that." Jackson Pollock's dripped paintings are now considered some of the best work of the 20th century and sell for millions of dollars. With Time-Flow Photography a new dimension has been added, the dimension of time. To the untrained eye these pictures might appear to be the result of luck but the best Time-Flow photographs are subtle and carefully constructed. However, most of us have been taught to avoid any kind of blur in a photograph -- so changing gears and seeing blur as an artistic technique does demand a new way of seeing.

The notion of accident brings up another aspect. One mistake with such criticisms is that they often confuse accident with chance. Time-Flow Photography is not accidental, but it does take advantage of chance, which is quite different  -- and is explained below. Rick Doble, Raindrops on a Windshield in a Moving Car, 2003
This photograph is not accidental.
This shot might seem accidental to the untrained eye -- yet it is anything but.
In heavy rain as Doble was driving, he turned off the wipers on his windshield and then he focused the camera so that it focused close-up on the drops of water on the windshield and also threw the lights on the highway out of focus due to depth of field. Next he waited to take this 8-second shot until he was the right distance from a stop light -- which he knew from past experience would create a web like red pattern and the red would also be reflected in the water on the highway. Then he steadied the camera on the dash of his car to eliminate camera shake to get a sharp picture of the water drops. Since the distance between the camera and the windshield was unchanging, the water drops on the windshield were relatively sharp. However, the approaching traffic lights at a slow exposure were spread behind the drops and out of focus. In addition because Doble had taken a number of pictures of water on glass, he also knew that each drop of water would act like a lens which would distort the light and the colors coming from the stop light and the traffic.

Accident Vs. Chance:
Saying that Time-Flow photographs are accidental can only mean no skill was involved --  that the photographer had almost no control over the outcome. This is simply not true as seen by the explanation above. However, chance often plays an important role, especially in candid Time-Flow Photography. Dealing with chance is not unusual. In fact, we all deal with chance everyday, such as driving down the highway and expecting the unexpected. This can happen, for example, when a car in front of us suddenly comes to a stop for no reason and we must brake quickly to avoid hitting it. Chance is something we all live with on a daily basis.

Candid Photography And Chance:
Candid photography for over 100 years has depended on chance to give its imagery an immediacy and a sense of the moment. Cartier-Bresson, who many consider the greatest photographer of all time, often framed a composition and then waited for a chance element to enter his camera viewfinder. But he could also compose spontaneously when the situation demanded. The exact moment when all the pieces came together, Cartier-Bresson called, "The decisive moment." 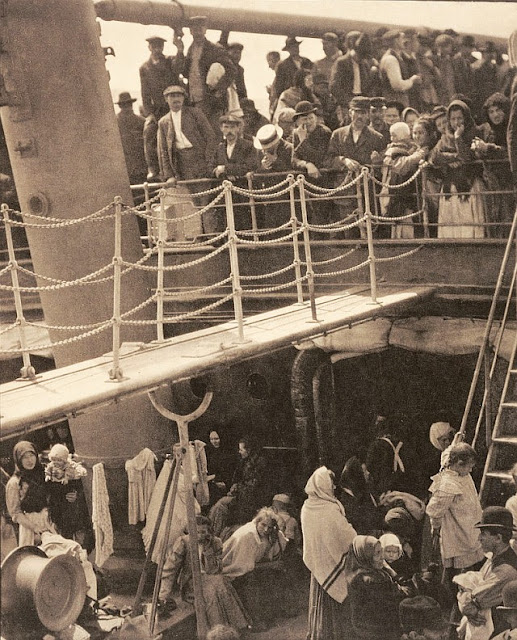 Alfred Stieglitz, The Steerage, 1907 (commons.wikimedia.org)
Considered a milestone in photography, Alfred Stieglitz came across this scene by chance when he was on a steam ship. He immediately saw the geometry and the stage-like arrangement, but crucial to the picture was the man in the straw hat (upper left) which was catching the sunlight. Stieglitz had to run back to his cabin, grab his quite large camera and return in the hope that the man had not moved. He was in luck. As Louis Pasteur so wisely said, "Chance favors the prepared mind," because it is one thing for chance to occur and a completely different thing to recognize and take advantage of it. Candid photographers are tuned into chance and make it part of their medium.

Stieglitz wrote:
On the upper deck, looking over the railing, there was a young man with a straw hat...A round straw hat, the funnel leaning left, the stairway leaning right, the white drawbridge with its railing made of circular chains…I saw shapes related to each other. I saw a picture of shapes and underlying that the feeling I had about life."
https://en.wikipedia.org/wiki/The_Steerage

Candid Photography And Time-Flow Candid Photography:
Both of these photographic art forms count on chance to give it a power and spontaneity that other forms of photography do not have. A candid Time-Flow photographer can create a framework in which chance can occur and then take advantage of such chance. For example, when taking photographs of musicians, a photographer might spend half an hour finding the right spot to frame so that the light, the colors, the background and the way a musician holds his or her instrument fits into a composition. Then using a slow shutter speed the photographer will try to capture a sense of that moment, capture the rhythm and the energy in a picture that records the musician in motion.

Chance And Modern Art:
Chance has been a major component of modern art and contemporary art such as the art of the Surrealists, the Dadaists, the Abstract Expressionists in addition to candid photography or street photography. There is even a term for allowing chance into the art process: aleatoricism.

"The marvellous mixture of emotion and geometry, together in a single instant."
Henri Cartier-Bresson

Time-Flow Photography demands that an accomplished photographer have a broad technical understanding of photography such as the interrelationship between focal length, aperture, depth of field, perspective, working distance and shutter speed; plus a knowledge of hyperfocal distance, circle of confusion, reciprocity failure, shutter speed and the desired effect, absolute and relative motion and ghosting or negative ghosting -- just to name a few, all of which need to be done manually and often quickly.

But also, just as Ansel Adams said almost 100 years ago, photographers can learn to previsualize their photographs before shooting, i.e. see the scene the way the camera sees it and not the way the human eye sees it. A Time-Flow photographer can also use this method to previsualize what a scene will look like when exposed over time -- which with Time-Flow Photography is markedly different from what the eye sees. With years of experience a Time-Flow photographer can imagine what a picture will look like with movement and a long shutter speed before taking a picture. Consequently they can learn to zero-in on different and new lighting situations that will work with this technique.

NOTE: "Visualization is a central topic in Ansel Adams' writings about photography, where he defines it as 'the ability to anticipate a finished image before making the exposure.'" (https://en.wikipedia.org/wiki/Previsualization)
Minor White refined the idea a bit, calling the visualization before taking a picture, previsualization but crediting Ansel Adams with the basic idea.

TRANSLATE THIS BLOG INTO ANY LANGUAGE